I am glad that you stopped to have a look at my Blog. Anything's possible, is my new catchphrase after suffering a major Stroke, once again thank you for stopping by.

I haven't been around in ages as have not felt like making any cards (my card supply is dwindling fast!!!)

Anyway, I thought yesterday that I needed to occupy my mind and thought that making a card would be a good way of doing that.

I decided to work with a Poppy Stamp, as it would have been my Dad's Birthday, however he passed away last November and as Poppies are for rememberance I thought this would be a good idea.

I decided to use the Sketch that was provided for by Truly Scrumptious - Challenge 43 - Easel Card as I thought the Sketch was lovely. I'm not normally good at making Easel Cards as I tend to lose my way on the inside bit, but I thing this one turned out ok. 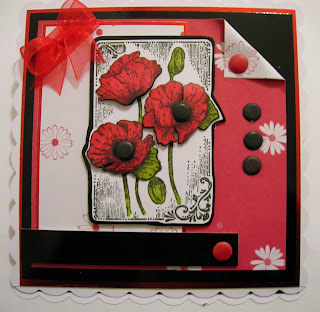 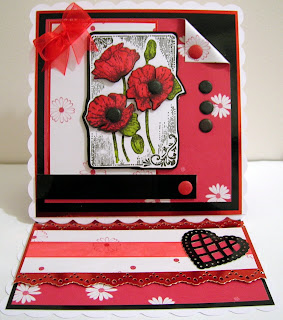 Firstly I matted some Red Mirri-card onto the base card and then layered on some Black Mirri-card. I decided that I was going to stick to black and red for this card. The DP I brought from a local Craft Shop, but they did not have a name on them, they came in a pack of 5 A4 Sheets for a reasonable price!! I layered one piece of the DP on top of the Black Mirri-card, but before I did this, I did not want just a white fold down and so stuck some of the contrasting DP on the back and so when I did the fold down in the corner you would see the other paper. I then layed the contrasting paper onto Red Mirri-card to give it a background and attached it to the card.
The Image came from Kanban, in a set that I was given from my Mum (it was meant to be for Christmas, but she had forgot that it was being delivered and let me open the package whoops!!!). I stamped the Image and coloured it in using my Pro-markers, I used the Poppy colour for the red and Moss for the Green, I thought that it would be good using the Pro-markers as they would give a deep colour for the image which I was looking for. Both the Image and the Black border are raised from the card on Shaker tape to give added interest. I used a bow, which I made from Red Organza Ribbon and also some Card Candy which I got from Craftwork Cards.
For the Inside of the card I used some Black Mirri-card as the base and layered the DP, the same as the front of the card on top. I punched some Red Mirri-card using a Martha Stewart Vintage Lace Border Punch and matted some of the contrasting DP on top which I wrapped some ribbon around. I then attached this to the card using some Shaker Tape to make it raised. Finally I punched out a Martha Stewart Heart Punch using black mirri-card and put some red paper behind it, before attaching it to the card.
I would like to enter this card into the Truly Scrumptious Challenge 43 - Easel Card
I hope you like the card.
Anne-Marie x x
Posted by Anne-Marie at Monday, October 18, 2010 2 comments:

Anne-Marie
Hi All, My name is Anne-Marie and I have always been interested in card making, although I have only recently started doing it for real. It was when I came out of hospital after spending 4 1/2 months at different hospitals after suffering a major Stroke. I am slowly recovering, but I no use of my right arm, bit of a problem when that's your dominant hand. I wanted to do something for myself and also to show people that you can achieve anything. Because Anything's Possible Take care Anne-Marie x x

I don't mind sharing my designs for inspiration, but please don't directly copy them or use them for submission to magazines, competitions or design teams etc. Thanks, Anne-Marie xx

I'm Proud to say I'm a Designer for 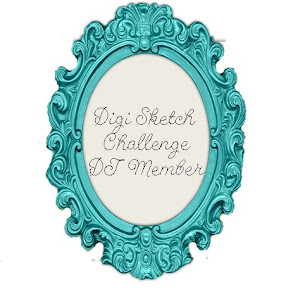 I'm Proud to be a Guest Design Team Member 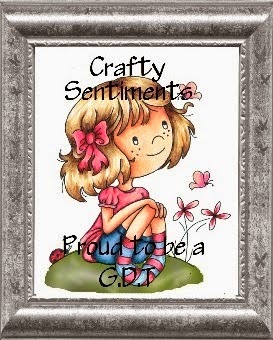